Responsible for steering Legrand's growth, the Executive Committee is a team of 8 members with complementary and varied skills, which brings together operational and support functions. With an extensive Group background, all of its members have an in-depth knowledge of Legrand, its business and its stakes. In addition to French, two other nationalities are represented, American and Italian, in line with the history and distribution of the Group's business. 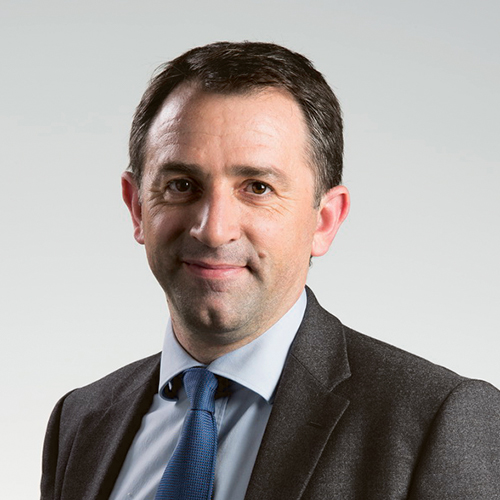 Benoît Coquart, born on November 30, 1973, is a graduate of the Institut d'Etudes Politiques de Paris (Sciences Po Paris) and of French business school ESSEC. He joined Legrand immediately after completing his studies in 1997, to manage the Group's activities in South Korea. He subsequently took charge of Investor Relations and pursued his career within the Group by successfully holding several positions including that of Vice-President of Corporate Development (M&A), Executive Vice-President Strategy and Development, and Executive Vice-President France. Benoît Coquart has been a member of Legrand's Executive Committee since 2010 and was appointed Chief Executive Officer in 2018.

Besides Benoît Coquart, the Executive Committee comprises the following members:

Born on January 7, 1972, Karine Alquier-Caro graduated from HEC Paris (1994). She joined the Group in 2001 after a 7-year experience at Deloitte as a Financial Auditor in France and Canada. After several experiences as CFO of Legrand industrial and commercial entities, Karine Alquier-Caro was appointed VP Chief Operating Officer of the Group Export sales organization in October 2012. She was appointed Executive VP Group Purchasing in April 2015.

A graduate of ESSEC business school and a qualified lawyer, Bénédicte Bahier began working in 2002 as a business lawyer with the law firm Linklaters. She joined Legrand in 2007 as legal expert in charge of corporate and governance related aspects, before holding positions as Risk Manager and Legal Manager. She was appointed Group VP Legal Affairs in 2012, joined the Executive Committee in 2013 and became Executive VP Human Resources in 2018.

Antoine Burel (56) is a graduate of ESC Rouen (NEOMA) and holds a DECF degree in accounting and finance. He joined Legrand in 1993. After several experiences in Group subsidiaries, he was appointed Head of Group Finance Control in 2005. In 2008, he became Group Chief Financial Officer and joined the Executive Committee. In January 2019, he was appointed Deputy Chief Executive Officer in charge of Group Operations, supervising the offer marketing, R&D, purchasing, manufacturing and supply chain teams in the various Strategic Business Units.

Born on December 18, 1967, Jean-Luc Cartet joined the Group in 1992. He held several management positions in the French Sales Network, before moving to the Group Marketing Department, later the Strategy & Development Department, where he was in charge of the residential business unit. In 2011, he took charge of the Spanish subsidiary, and later of Spain and Portugal. In 2015, he was appointed to head the Group’s Brazilian subsidiary, before being put in charge of the South America area. In 2018, he was appointed Zone VP Asia-Pacific Middle East Africa South America. He joined the Executive Committee in January 2019.

Gloria Glang (39), has an educational background at the Westfälische Wirtschaftsakademie, Münster and INSEAD, France; she started her career in BASF where she held different global roles in Controlling, Marketing, Inhouse Consulting and Key Account Management. She joined KPMG in 2008 where she headed M&A and Strategy Consulting for Chemical & Pharmaceutical Industries. In 2013, she became a Member of the EMEA Leadership Team in PPG, leading their Corporate Strategic Planning and M&A team, as well as their business in the Africa Region. In 2016 she took over the leadership of a global business in Clariant. On Oct 1st, 2019 she was appointed a member of the Executive Committee and Executive VP Strategy & Development of Legrand.

Born on June 17, 1967, Franck Lemery is a graduate of the French business school ESCP Europe and holds a DESCF in accounting and finance. He worked as an auditor at Ernst & Young before joining Legrand in 1994. He first served as Group internal auditor and then successively as CFO of several Group entities. He was appointed Head of Group Finance Control in 2008 and was later also put in charge of internal control and risk management. In 2014, Franck Lemery became VP Operations Performance. He has been the Group CFO since January 1, 2019, when he also joined the Executive Committee.

John Selldorff (59) holds an MBA from the J.L. Kellogg Graduate School of Management at Northwestern University. He joined Legrand in 2002, after holding various top management positions within the industry, and was appointed President and Chief Executive Officer Legrand North America and a member of the Executive Committee.

Born on May 23, 1969, he joined Legrand in 1992, holding various positions in marketing in Germany and France until 1999, when he took charge of a Strategic Business Area at the Group Marketing Department. In 2003, he moved to Russia as Sales Director, and later Country Manager (2005). He moved to the Export Department in 2010, taking on the position of Deputy VP Export before being appointed Group VP Export in 2012. In 2018, he was appointed Executive VP Europe.