Our differences are a strength

Legrand is based in nearly 90 countries and attaches a lot of importance to respecting individual and cultural differences. This includes equality for men and women, for people with a disability, for both young and senior staff, people of all ethnic origins, as well as freedom of religion and sexual orientation, etc. All of these principles apply to our HR policy.

Diversity, which provides access to a vast variety of profiles, helps to boost performance, innovation and the quality of life within the company.
To promote this diversity, the Group ensures that its HR processes are transparent, objective, based on the assessment of skills, and non-discriminatory. Our sole objective is to recruit talent.
And once past the recruitment stage, diversity is promoted and supported daily within the company.
Our approach is to make sure our vision is shared and work towards eliminating prejudice at all levels in the company in order to change attitudes. Training and awareness-raising campaigns are offered to staff (new or already in place) to encourage them to identify and overcome their prejudices.

The principles of diversity enshrined in the Group's Charter of Fundamental Principles were set out in the 2014-2018 CSR roadmap, in which Legrand committed to promoting diversity in its teams and preventing any form of discrimination.

The Group is also a signatory of several charters and conventions which guarantee respect for human rights within the company, both in France and its subsidiaries abroad:

Today, it is everybody's responsibility to ensure people with a disability can access and remain in employment, by adapting workstations.
In France, an agreement for the prevention of disabilities and integration of disabled people was signed in November 2017.
This agreement has 3 parts to it: a recruitment plan, an integration and training plan (including workstation adjustments), and a plan to retain staff in the company.Awareness-raising actions are also developed to encourage management to improve the inclusion of disabled people in the workforce and offer them career management and promotional prospects.
Therefore, equal opportunities and job accessibility for people with a disability is not just a promise, but a reality.

In France, 8%
of employees with disabilities (2 percent above the French legal requirement)

14,8%
of women in key positions in the Group

Nearly 90 nationalities represented among our employees

4 things which are possible at Legrand

✓ Contributing to a network which values diversity (elle@legrand)

✓ Having a workstation designed which is adapted to your disability

✓ Talking about your difficulties with your manager, and making mistakes without being judged

The Group intends to promote diversity in all of its professions. Our aim, which is recorded in the 2014-2018 CSR roadmap, is to increase the number of women in key positions by 25%. This approach should enable women to access positions of responsibility.

Various means and actions are implemented to encourage more women into management positions and guarantee that women enjoy the same employment conditions as men:
- recruiting women in a proportion that reflects the percentage of women graduates leaving higher education;
- involving all actors, in particular HR and managers;
- promoting the same proportion of men and women with equivalent experience and qualifications;
- enabling women to better manage their careers.

Initiatives differ according to the country and environment, but they all have the same aim.

Elle@Legrand – the international network that promotes diversity within Legrand

Sponsored by General Management and comprised of men and women who firmly believe that diversity at all levels of the company is important, this international network was created in 2013 with the aim of:
- enabling women to develop their careers;
- raising awareness and providing training on diversity for men and women;
- making women's (and men's) voices heard through working groups on topics such as:
o cultural changes;
o skills development;
o the representation of women in the electricity sector and economic chain*.

Among other actions, this network also focuses on female high-school and university students to:
- spark their interest and encourage them to pursue jobs in technical areas;
- show them the richness and diversity of jobs and careers in industry. 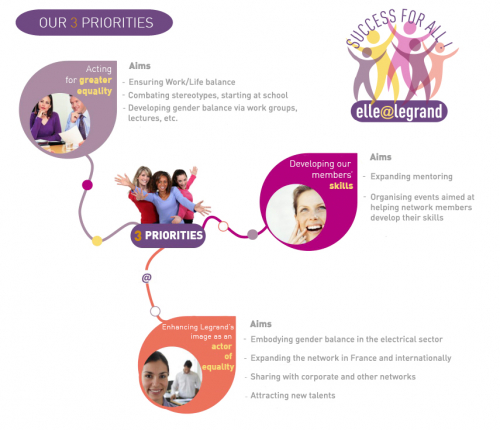 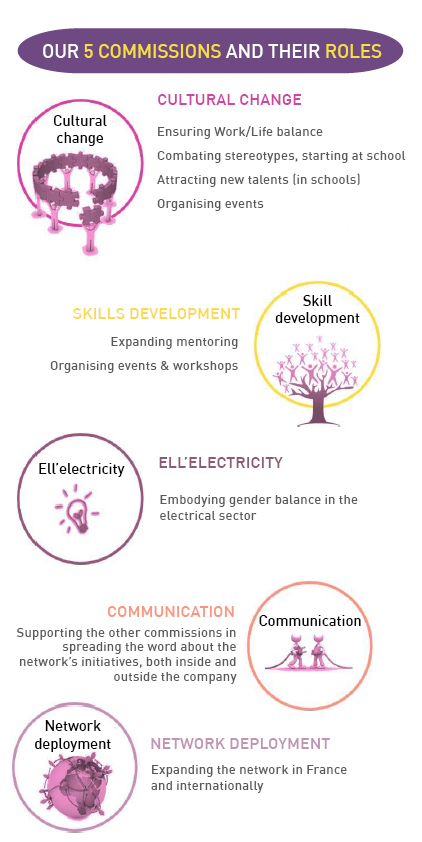 In 2018, France extended a structural agreement on gender equality at work.
In particular, it ensures the application of equality principles in France through the nomination of the Professional Equality Guarantee commission: a body made up of four independent Human Resources Managers, with its own budget, tasked with changing attitudes, promoting diversity in teams and combating all forms of discrimination.

In the framework of the French law of 5 September 2018 and the ensuing application decree published on 8 January 2019 aiming to eliminate pay gaps between men and women in business, Legrand published on friday, march 1st its gender equality index, which reaches a score of 85/100.

Each company’s score is calculated based on the following 5 criteria:

Legrand’s score is the fruit of a long-standing commitment to workplace gender equality, which has been enshrined in its CSR roadmaps and reflected in company agreements, the latest of which, dating from January 30, 2018, was recently unanimously extended.

Moreover, the announcements made by Benoît Coquart in April 2018 fully espouse the spirit of these governmental measures, expressing the company’s assertive policy on workplace gender equality and demonstrating the Group’s determination to boost a culture of inclusion.

Other countries stand out for their good practices in this area.
Mexico, for example, conducts an active recruitment and professional development policy for women in its organisation. It has also introduced a diversity module in its induction and training programmes.
Numeric in India pays particular attention to the promotion of female managers by setting up flexible working systems.
Hungary is taking action at all levels of its organisation and has developed a training programme for women in order to facilitate their promotion.
In all countries, wherever local cultural practices permit, each recruitment represents an opportunity (given equal levels of competency) to contribute to the strengthening of female representation within the company.